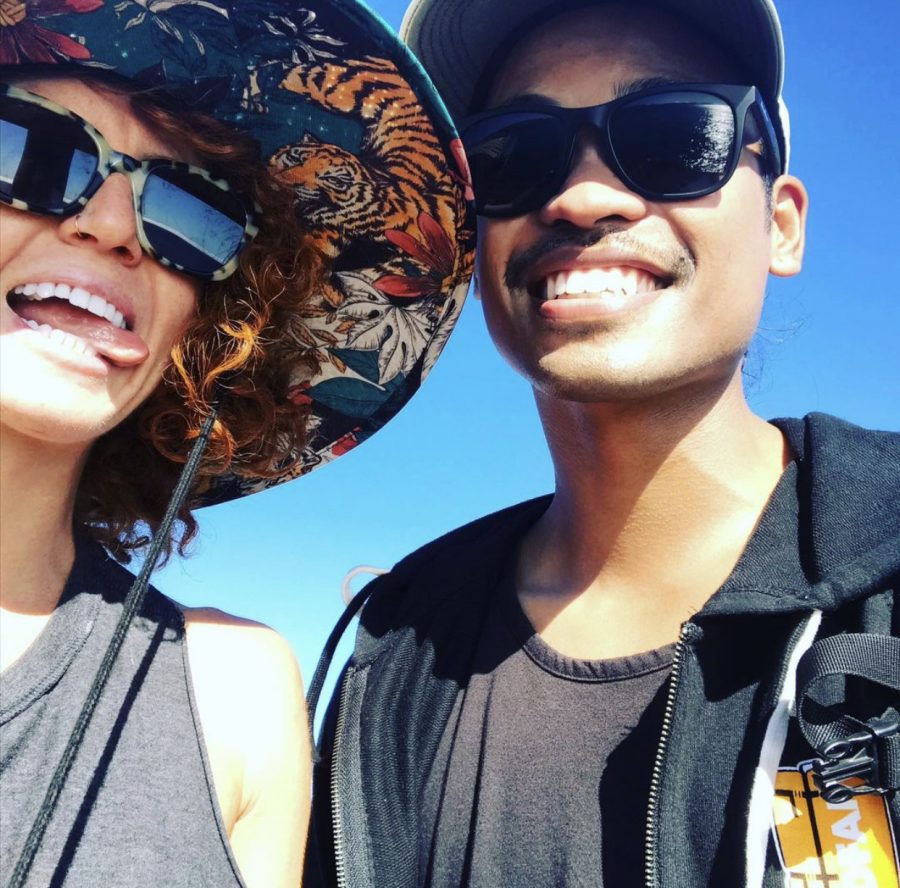 Ms. Willis and her partner.

Ms. Willis is an AVID and English teacher. This is her second year at SMHS. This year has been her sixth year as an educator. “I love working with the young people at SMHS.  My students are awesome, and their honesty, intelligence, and humor spark joy,” she said. She is currently a co-facilitator of GSA. “I think that holding space for students to experience and explore their identities and work collaboratively with each other in extra-curricular contexts is vitally important. I’ve had visions of collaborating with others as part of an interdisciplinary ninth grade on-track team to support our incoming freshmen. I think it would be super cool to have an across-the-board system that would ensure that freshmen are on-track to graduate, knowing that they have a team of core teachers cheering them on. Ultimately, my source of joy and my purpose at SMHS is to offer a rigorous, relevant, and enjoyable curriculum to my students.  I am here to serve them,” she said.

When she was in middle school she used to volunteer at libraries or shelters during the summer months or winter holidays. She would often help with toddlers at Vacation Bible Schools. In high school, she tutored chemistry and French. She attended UC Berkeley for her undergraduate degrees (Anthropology and French) and first Masters (French and Francophone Literatures). While there, she worked as a mentor at an elementary school, with the Disabled Students’ Program, in the French department as a tutor, and as a ballet company officer and peer-instructor for Ballet Company at Berkeley.” I also had the opportunity to meld athletics, nature, and learning when I volunteered for an East Bay non-profit called Urban Play, which aims to get kids from underserved and underrepresented communities out-and-about and playing in the Oakland, Richmond, and Berkeley communities. Super fun stuff!” she said.

She received her M.A.T at Pacific University near Portland, Oregon. She has since taught in Hillsboro and Beaverton (OR), Berkeley and Richmond (CA), and Shanghai (China). She thought she was going to study chemistry, viticulture, or comparative literature. “I love learning, and I especially love nerding out on a mixture of subjects,” she said. These interests led her to rhetoric and anthropology. “In truth, I had no idea I was going to teach at a level below university-level. I was in a fully-funded Ph.D. program at Cal (Berkeley). After my M.A., I realized that I really missed the fundamentally human part of working with young people (not just abstract ideas or theories). At that point, an advanced degree in a world language and critical theory seemed merely esoteric and, to be perfectly honest, a little bit selfish and self-serving. I love what I do now,” she said.

She was working in Richmond when the COVID-19 pandemic became a matter of concern in the U.S.  “I recall telling some of my friends in the States that it was going to be a bigger deal than Americans were ready to reckon with, as I had heard from my friends in China about the strict (and probably necessary) social restriction measures and quarantine practices that were being enacted by the Party. I still maintain that we didn’t really have a lockdown…at least not in the formal sense,” she said. The Bay Area shut down really early. They were cashless, reusable-bagless, and subject to recommendations for curfews and social gathering sizes. The school where she was working was one of the first to shut down due to a COVID outbreak, prior to the official mandatory quarantining of Alameda county, which was followed by the March 13 announcement of a National Emergency at the federal level. “I feel very fortunate that I was able to work, maintain my health, speak with, and spend time with a close knit group of people I love and about whom I care deeply, and I am thankful that I have been able to keep fresh and healthy foods on my table,” she said.

Ms. Willis is a passionate person. “I’m passionate about engaging with each day as my best self. I’m a realist, but I also idealistically hold the hope that people aim (or at least envision) to be better versions of themselves. It’s my view that if people were to wake up and actively take steps toward embodying the most giving, authentic, honest, and compassionate version of themselves, the world (and its global communities) will be more equitable, empathetic, just, and whole,” she said. Her family is fairly small. She has a mother, father, sister (and her fiancé), and her partner. Ms. Willis has been to many places. “I’ve been incredibly fortunate to have had (and seized) the opportunities to travel.  I’ve been to several states here in the U.S., and I’ve spent lengthy periods of time in Thailand, Singapore, China, France, and Germany. I would very much like to explore more of Southeast Asia,” she said.

If Ms. Willis were a fruit she said she would be an avocado. “I find leafy greens, root vegetables, and avocados grounding and nourishing,” she said. There are some things that entertain her. “I don’t watch T.V. Nevertheless, I do enjoy a good ol’ film or documentary.  I’m a creature of habit and a habitual re-watcher of cult classic films, like Moonstruck starring the inimitable and iconic Cher,” she said. She is a very active person. “In my spare time, I swim, hike, cycle, ski, backpack, camp, and also like to chill hard with twinkly lights, incense or candles, and some good ol’ Phoebe Bridgers or some other such sad-girl music. I love spending time with my partner and his old-man-of-a-dog, Dex. I’m big on salt and mineral baths because my body is, like, 105 years old,” she said.

She teaches swimming lessons as a side hustle, and she used to work in fitness, as well as dance. “Right now, I find swimming to be my most quieting physical outlet. Water is so soothing! I think teaching, counseling, or guiding will always be in my life. However, I have fantasized, as well, about being a national park ranger,” she said.

She is a functioning extrovert, but is actually quite introverted. She has good communication skills. “I’m honest and authentic. I find humor and relationships to be central to working with any humans, and particularly young folks. But, as I said, the students know what they know, and that is pretty truthful. Ask them,” she said. She has a tip for students who are planning to go to college. “Try everything! Apply for all of the scholarships! Don’t listen to haters. Be you. You are wonderful,” she said. She also has a piece of life advice. “Here is a place where I’m going to pull a literary nerd move and quote Octavia Butler: ‘All that you touch you change. All that you change changes you. The only lasting truth is change.’”