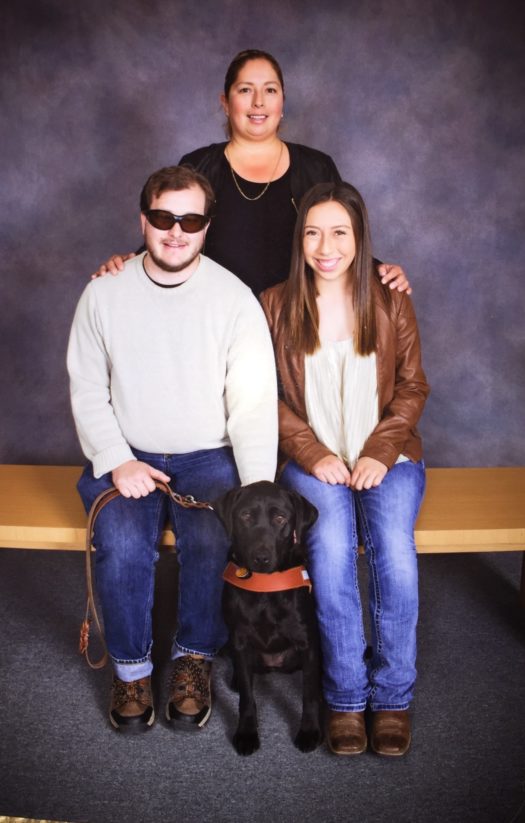 ▲
Ariadna Romero sitting next to Jordan Fitzpatrick and Felice the dog.

▲
Ariadna Romero sitting next to Jordan Fitzpatrick and Felice the dog.

No matter where you’re heading to on campus, whether your speed-walking to get to your class or breezing by because you have all the time in the world, chances are you’ve probably come across Ariadna Romero and her guide dog. Many people have speculated on why she chooses to bring a guide dog almost everyday at school. Some people however, don’t seem bothered by this adorable dog, given that it acts fairly well-behaved and rarely does it ever cause a problem for those on campus. Ariadna clearly knows how to keep this dog under control in an environment that can sometimes be a little chaotic, what with hundreds and hundreds of students, staff, and faculty members walking around school everyday. If you just started attending Santa Maria High School this school year you’ve probably wouldn’t have guessed that this isn’t the first appearance of Ariadna’s guide dog.

Ariadna has been training Guide Dogs for the Blind ever since her sophomore year, spending many long hours potty training them and teaching them basic manners around people.  It all started in her Agriculture class, when part of her grade was dependent on completing her Supervised Agriculture Experience project. It was then that Ariadna had a moment of realization, in which her life would be spent by either complaining about the problems within her community or bringing the change that her community deserved. So she became a proud member of the Los Padres Guide Dog Puppies, with her many duties including teaching the dog basic obedience, good manners, and introducing it to new experiences such as bringing the dog to school. Ariadna’s determination for this project of hers would come to show as she had to find a way to balance school, training the pup, and also attending her meetings with the Los Padres Puppy Raisers twice a month.

In November of last year, an email was sent to her from Guide Dogs for the Blind where they informed her that the first pup she trained, Felice, would be graduating as an official Guide Dog. She couldn’t be prouder at the news that the black Labrador pup she received in September 2017 would now aid the blind in their daily life. Given that Ariadna trained Felice from a 6 month old to a 15 month old, the ceremony held in San Rafael, California would prove to be very emotional. It was also during the ceremony that she would present Felice to its new owner Jordan Fitzpatrick, a student attending Fresno Sate with the dreams of becoming a Psychologist. Because Ariadna  wanted to take part in something bigger than herself, Jordan will now be able to achieve his dream with his new life long companion by his side.

By giving back to her community, she is also raising awareness in the benefits of training guide dogs in the form of presentations that are inspiring and motivating many students and she hopes that this will catch the attention from outside of Santa Maria High School. Ariadna’s goal that other schools in our district and the community will also be inspired and motivated by the benefits of training guide dogs comes from a deep passion of making life easier for the members of the disabled community. The entire experience of raising guide dogs has made her more aware of the powerful hold a helping hand in her community has for those in need. Felice, as well as the dozen or so other guide dogs she has helped raise, helped her come to the realization that no matter the size of changes in the community, its always going to leave a big impact in many people’s lives.