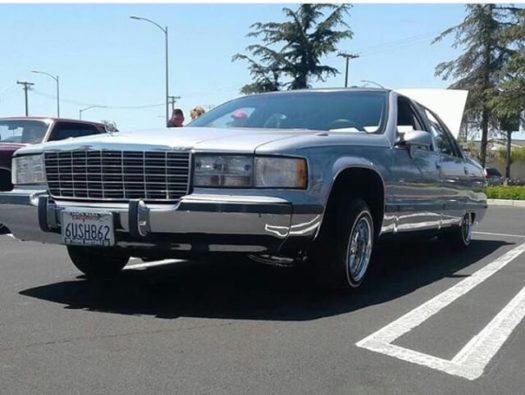 At first glance, you would assume that Santa Maria High School sophomore Ruben Padilla was just another stoic outsider who was hanging with the wrong crowd. However, if the old saying is true, then looks may very well be deceiving because those crude, stereotypical remarks couldn’t be further away from the truth. In reality, the core of Ruben’s character is a confident and comedic person who has a deep and passionate love for lowriding. He knows anything and everything about lowriders, to the point where he can name every lowrider term, tell you the history of lowriders, and visualize in his head how he can design them. Given this level of dedication, one can only wonder how someone like Ruben acquired this endless knowledge of lowriders.

In cases like these, the most obvious answer is almost always right in front of you, and in Ruben’s case you don’t have to look any further than his family. Growing up around the constant customization of lowriders, it was only natural for Ruben to blend into that world and find a certain joy out of it. His father and uncles introduced him and his cousins to lowriding as early as he could remember, just like they had been introduced to it by Ruben’s grandfather. Aside from Ruben’s mother, who liked cars but ultimately did her own thing, almost everybody in Ruben’s family customized or knew how to customize lowriders. Ruben’s little brother, who loves cars just as much as Ruben, is a testament to how this tradition of lowriding in the family is still being kept alive. You would think that Ruben’s family owns an automobile repair shop based on their passion for cars, but surprisingly Ruben’s father only does it as a hobby, a skill set taught to him by his father, who learned it from his father.

Its safe to say that the Chicano community is the most passionate culture of people when it comes to lowriding, but oddly enough it didn’t start off that way. By installing hydraulics on cars, an idea revolutionized by Ron Aguirre in the late 60’s, that art of lowriding was popularized and made for everybody, but the Chicano and African American community would take it over during the early 70’s. Along with many African Americans, the Chicano culture expressed their individual freedom through lowriding back in a time when they weren’t allowed to express their freedom in other ways. Over the next few decades, lowriding would undergo many significant changes, with the 80’s being responsible for stereotyping that lowriders were for gang members, and the 90’s and 00’s improving upon the lowrider’s hydraulic power and bringing reinforcements.

Many of these changes included the addition of more customization elements such as the type of paint, wheels, and cars used for designing lowriders. Having a wide variety of choices for different styles can prove to be a good thing, as it was explained to me by Ruben, because he says, “your personality can go into a car.” Its because of this reason that seeing other, different cars is so unique to Ruben because no two cars are the same. When I asked Ruben about the stereotype that lowriding was for gang members, he told me that there was more to it and that gang members would get out of trouble by using their money on lowriders instead of on drugs. Ruben’s own car, a ’94 Cadillac Fleetwood, designed by his dad, is proof enough that having passion and dedication for what you love could shine bright and catch anyone’s attention, just like “flake” (paint style) on a lowrider.