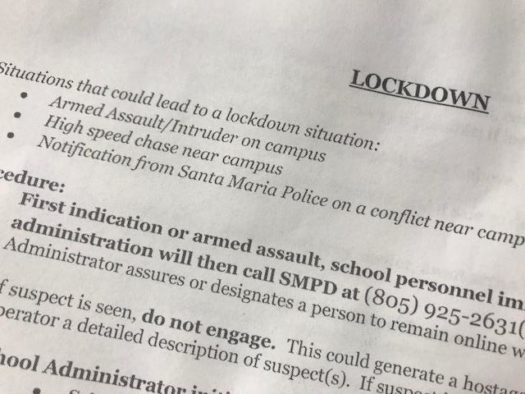 On Tuesday, September 5, Santa Maria High School held a lock down drill as part of the ALICE training protocol. Teachers were told to lock their doors, turn off all their lights, and wait for further instructions. Afterwords, the principal emailed the staff to report back if they were okay. Finally, they gave an announcement saying that the drill was over and for the teachers to resume teaching their classes. This procedure happens annually but has been treated more carefully, given all the drama that followed at the tail end of the last school year.

School shootings have, unfortunately, become a recurring event ever since the incident from Orlando last spring. The event garnered so much media attention that SM High, among other schools across the nation, hosted a walkout in protest to end gun violence as a whole. The walkout was intended to unite the community of SM and to change the gun laws in the United States. Unfortunately, in another incident that occurred last spring, an “anonymous” SMHS student posted a Snapchat photo of them holding a gun with the implication of causing anarchy and mass hysteria. What followed was exactly that, with parents pulling their kids out during classes, to the students pulling themselves out of classes. The “anonymous” student was eventually apprehended with the weapon that they were wielding turning out to be a BB gun.

Ever since then, the lockdown drills have been handled with more care. Because of this, the school issued a new lock down training protocol called ALICE. Each letter represents a different tactic in which to handle the situation. It stands for Alert, Lock down, Inform, Counter, and Evacuate. All teachers are required to show the ALICE training protocol video and discuss with their class other ways to handle the situation.

Personally, I think that this is a great improvement because in the past, lock down drills were treated the same way as earthquake and fire drills. Before, they weren’t given a second glance, but with everything that has happened in our recent history, I think it’s safe to say that lock down drills are being treated more seriously, as they should be.