A Project for Better Journalism chapter
The Breeze
Welcome back, Saints! Let's make this an amazing year!
News, Student Life

Speech and Debate: Tools for the Future 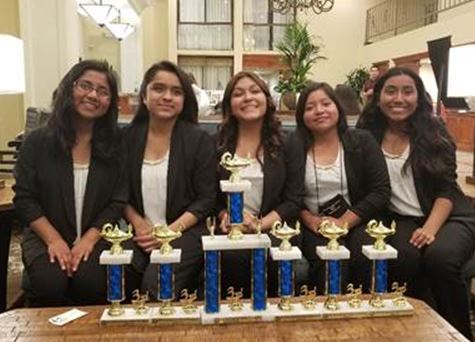 Speech and persuasion are powerful tactics that, when mastered, can give students great possibilities, both inside and outside of school.  Creating change is what many hope to one day accomplish, and this goal, no matter how large or small, is certainly aided by the ability to speak well and convince others to see a certain point of view.  To manipulate the English language and use strong rhetorical tools is no simple task, but with enough practice, it can become an effective skill to hold.  For six Santa Maria High students, they had the opportunity to put on display their skills of speech and debate.  The Migrant Education Program held the Speech and Debate Competition, from May 4th to May 6th, where students from Santa Maria High and Pioneer Valley participated in rigorous competition.  The team of Santa Maria High students faced off against fifteen other teams and was able to place 3rd overall, a sure sign that these students know their way around rhetorical language and debate tactics.

One student, Jennifer Lopez, detailed her experience and the topic her team had to work with.  “The topic of our debate was if solitary confinement should be abolished and is a violation of human rights,” she said.  “We prepared every Thursday and had mock debates.”  The team had to focus on both sides of the topic, which is an important task to manage.  Accounting for both arguments makes for stronger persuasion and also takes into consideration any opposing viewpoints, allowing for a richer debate.  Jennifer explained the composition of the team, saying, “Our team was composed of 5 people: the opener, cross-examiner, responder, rebuttal, and closer.  The opener and closer had to memorize their whole 5-minute speech.”  After the opening speech, the opposing side would ask questions, where teams would then offer rebuttals.  This required providing greater evidence for their position, as well as explaining why their side was correct.  Jennifer went on to add, “It was really stressful. . . We had to think right on the spot.  We were well prepared, and we worked really well as a team.  It was a rollercoaster of emotions, but the outcome was totally worth it.”  A very special outcome indeed, as placing 3rd overall is not an easy goal.  Isabel Cruz, one Santa Maria High Student who participated primarily in the speech competition, also brought home an individual award, placing 3rd in the speech category.  With trophies in hand, these students proudly returned to Santa Maria High confident in their abilities and recognized as certified speakers.

The students who participated in the Speech and Debate competition have already set the building blocks toward a better future.  By establishing the power of speech, it is crucial to remember that words carry more weight than we may think.  Some of the greatest leaders of history were known for their skills as an orator, able to inspire a nation, or influence a great number of people.  The path to change may begin with a single speech.  For these award-winning students, they are well on their way to become the change they hope to bring to the future of our world.