A Project for Better Journalism chapter
The Breeze
SENIORS! Your senior portraits are due soon. Check out our Flow Page for more information on all things Yearbook!  More →
Feature, Humans of our School, News

In the Life of Joseph Cruz 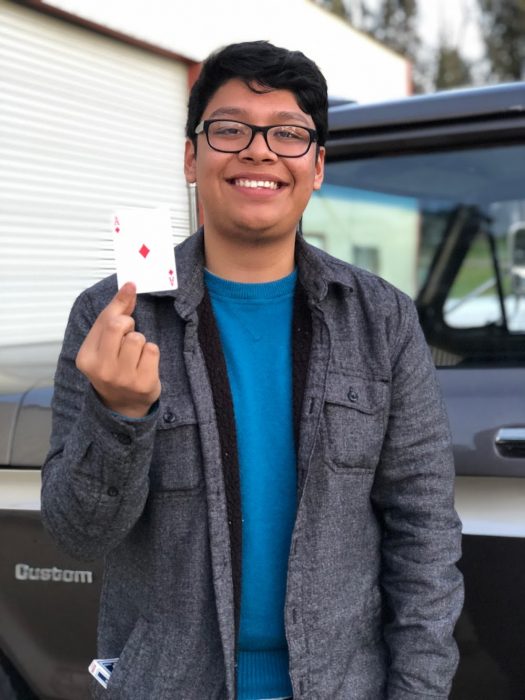 Each person has a story that helps shape them into who they are. Not everyone’s story is perfect, as a normal human being we have struggles and setbacks that can alter our life in a drastic manner. Joseph Cruz’s story is one of those. Joseph Cruz is 18 years-old and a senior at Santa Maria High School. He lives with his older sister and his father, but his father is not around a lot because of his on the road job as a truck driver. But when he comes home on the weekend, he spends as much time with him as possible. He is a very friendly young man and can entertain any crowd with the wonders of his magic tricks. I met Joseph freshman year in our AVID class, taught by Ms. Tajima. I never thought too much him, I just thought he was a goofball that only hung out with childish boys. That was until this year when we had the same math class. We formed a study group of him and I and another class member, and this is the environment where our friendship grew.

Growing up, Joseph’s family is what shaped him into who he is today. He has two older sisters, an older brother, and his father. Unfortunately, Joseph’s mother passed away 5 years ago. Throughout his life his family would always put in their best efforts to support him, whether that be attending his basketball games or just simply spending more time together. His family has shaped him into who he is today because after the passing of his mother, his family’s love and appreciation for one another grew stronger. When asked about the impact his family has had upon him, Joseph’s response was “My mom passing away 5 years ago was a changing point in my life. When my mom was still around I still was the baby. Then when I was 13 and she passed away, and that structured me into acting like an adult early.” Although Joseph had to grow up earlier and face more problems compared to other kids, he did a good job in making his family proud.  For any of you that may have lost someone at a young age, I give you props for persevering through and staying strong, because losing a loved one is no walk in the park.

Joseph is now soon going to graduate high school and move on to starting his future. He will be attending two years at Allan Hancock Community College starting in the fall and hopefully transfer to California Polytechnic State University majoring in aerospace engineering. He hopes to make his whole family proud by pursuing his dreams. Joseph’s story may not be perfect, but it’s those imperfections that make it so great.