Wresting: a Sport of Dedication 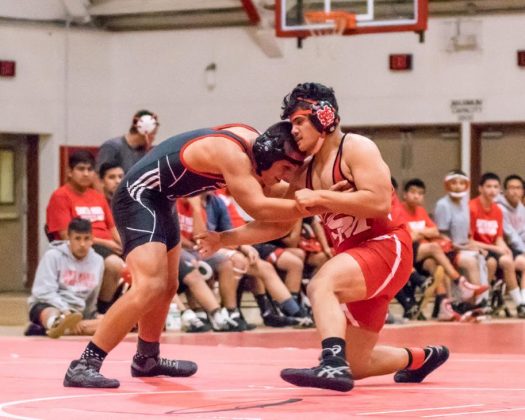 Feet are constantly moving, never stopping. Muscles are sore and aching, begging their person to stop and take a break. Heads are thumping and in pain. In this room, it is hard to think, but easy to wrestle. In this room, you can’t think of anything else: wrestling is the only option. There is sweat dripping from each other’s clothes and onto the mat where people are constantly being thrown onto. Coaches are yelling loudly, just enough so that everyone in the room can listen to the next objective. “Shoot! Sprawl! Jump!” Finally, the timer hits zero so that they can all take a break from the dreadful drills, only to know that in half a minute we will start again, and again.

This is wrestling. Hard work, sacrifice, and determination. These are the only three qualities required for a wrestler to be truly successful in the sport. There are many competitors for the spot that you truly want, the only way to get it is to beat out everyone else in organized matches during the practice.

Wrestling is one of the toughest sports in high school because it not only requires mental and physical toughness, but also a lot of hard work. Many people overlook the sport and only see it through its exterior during tournaments. However, these people fail to recognize what goes into the sport in the interior to become truly successful in it. It is safe to say wrestling is the only sport where the practices are harder than the actual competitions. Practices are usually in wrestling rooms that reach temperatures of 85 degrees Fahrenheit or more due to the heat and exhaustion that is released by the wrestlers. In addition, the sport requires wrestlers to memorize a long list of advanced fighting techniques to get better than their opponents. This means that many hours are spent in the sauna-like rooms drilling the same moves hundreds and thousands of time until they are perfected. No other sport is like that.

There are very few athletes that work as hard in and out of practice as wrestlers. Another quality that a wrestler must have is sacrifice. Sacrifice in the sense that one must be willing to meet specific things that the body needs in order to make weight. Cutting weight is one of the major issues in that it puts a lot of stress and emotional impact on wrestlers. Wrestlers must constantly lower their caloric intake each and every day during the season to stay in their weight class. In other words, athletes from other sports work hard, but when they go home they get to eat whatever, and even have seconds if they wanted. Wrestlers work excruciatingly hard in practice, go home to eat four ounces of vegetables, and then go to bed hungry only knowing that the next day will be the exact same thing. Sacrifice is what separates wrestling from the other sports.

Determination is the last and most important quality that a wrestler must have in order to be great. Wrestlers can form a plan when all seems lost and find the guts to carry it out on and off the mat. Wrestling can teach you to keep calm and think during rough times and continue with what you need. However, the sacrifices you go through during your wrestling career in high school will teach you to only become determined and ready to dominate whatever comes in your way during this time of your life. Wrestling is a sport that is truly tough. After all, as the legendary Dan Gable once said: “Gold medals are not really made of gold. They’re made of sweat, determination, and a hard-to-find alloy called guts.”