A Project for Better Journalism chapter
The Breeze
Welcome back, Saints! Let's make this an amazing year!
Clubs and Organizations, News 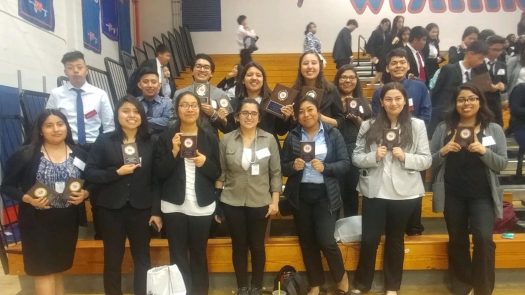 ▲
FBLA members holding the awards presented to their great organization.

▲
FBLA members holding the awards presented to their great organization.

The Future Business Leaders of America at Santa Maria High School work extensively to build up a group of students prepared to take on the business world after high school.  The club offers students the unique opportunity to explore their leadership skills and build confidence in their own abilities, as well as in their performance inside and outside of the school.  With a world that is constantly evolving due to new technology and great innovations, these business leaders are poised with the necessary tools to make contributions to business in America.  These tools were put to use on Saturday, February 3rd, when the Future Business Leaders of America visited Westlake High School to participate in the Gold Coast Section Conference, where many members brought back awards celebrating their great achievements.

The Gold Coast Section Conference gave FBLA students the opportunity to showcase the skills they have learned during their time as an aspiring business leader.  The events included categories such as hospitality, entrepreneurship, and public speaking.  Various workshops and testing stages were at work as well, with the intention of giving students a platform to display their great skills and development.  One member from Santa Maria High School, Isabella Blanco, received First Place honors for her outstanding achievement in public speaking.  Isabella spoke about her involvement in FBLA and the Section Conferences, saying, “This has been my third time attending Section Conference for FBLA.  I always love the experience, as I find myself learning some new networking skill or connecting with another FBLA member of another chapter.”  Isabella’s three years of involvement have given her greater chances to expand upon her leadership skills, as well as open up new avenues for the future.  Her past experience in public speaking has been exemplary as well, bringing home first place honors her freshman year, and third place honors last year.  This year, as she called it, was “redemption time.”  She continued to explain her preparation, saying, “I prepared this speech that I memorized completely and spent a lot of time practicing.  I felt really confident.  I took a lot of inspiration from the things we had done in FBLA this year and used it as a central component of my speech… It was such a feeling of relief to be back on stage presenting my speech and in my element.  I was absolutely ecstatic when I found out I had won first place at the awards ceremony.  It just validated all the time I put into this speech.”  The next step for Isabella Blanco is to continue on to the FBLA State Conference in April to compete in public speaking once again.  With the impressive track record she has created so far, Isabella certainly has the momentum on her side to deliver another stellar performance.

In addition to Isabella Blanco’s award-winning speech, many of her peers also had great success in their respective categories, such as Paulina Zarate taking 8th place in hospitality, and the team of Erika Espinoza and Jaqueline Ramirez taking 8th in sports and entertainment.  These achievements are great reminders that these business leaders are already on their way to making a positive impact on the world around them.  With the future of business in their hands, nothing will hinder the great strides this club is making for the betterment of American business.