A Project for Better Journalism chapter
The Breeze
Welcome back, Saints! Let's make this an amazing year!
Clubs and Organizations, News

Spanish Honor Society: Using Language As a Tool for Change 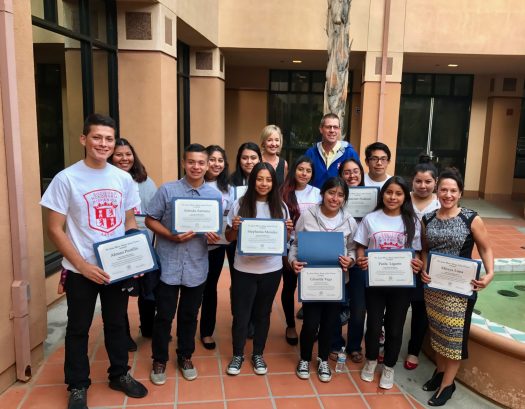 In a constantly growing world, one of the most important things that young students can learn is the importance of bilingualism.  Knowing more than one language is a powerful tool that is greater than a skill to show on an application.  It is the ability to break down barriers, and to provide assistance in different ways.  The Spanish Honor Society does just that, on and off campus.  It is a club dedicated to growing the Spanish community by spreading the influence of not only the Spanish language, but also showcasing how a determined group of students can spark change using the power of language.  The catalyst behind it all is Mrs. Luna, helping her students achieve their goals and encouraging them to continue to pursue the Spanish language and culture.  In a recent interview, she spoke about the club and her students, and how they have created an impactful club that is sure to grow in the coming years.

The Spanish Honors Society has one goal in mind at the start of each year: recognize students and their great achievement in Spanish.  Students must complete 3 years of Spanish courses, and must also have a 3.5 GPA within those Spanish classes.  The club is designed to foster young leaders who have shown great potential in the classroom and are ready to explore outside the class.  One activity that has been a staple is the interpreting that students do. Mrs. Luna, advisor for the club, explained, “For the past year, we have been doing a lot of interpreting for the Santa Maria Bonita School District. During their back to school nights, Spanish Honor Society members go, and they interpret for teachers.” While the teachers explain things like expectations within the class, the students help translate the information to parents and students. These members also interpret for school events like the GATE workshop, held on October 23rd, again helping parents and students. “It’s very powerful for them, it’s very meaningful that they see how language is a tool they can use to their advantage,” Mrs. Luna commented on the impact these students have.  This impact did not go unnoticed.  On September 13th, the Spanish Honor Society was recognized by the Santa Maria Bonita School District during an official board meeting, where the superintendent of the district invited the members and Mrs. Luna to recognize their service to the school district. Mrs. Luna explained her reaction, saying, “This was a surprise and a shock because we have never done [community service] to be recognized.  We do it because we think it is important that parents and teachers can communicate better.”  The club has always made it a priority to better its community in any way possible, and this acknowledgment has made their message even stronger.  Within Santa Maria, the club is also making advancements toward creating a platform for the Spanish culture to prosper.

During the 2016-2017 school year, the Spanish Honor Society had seen a growth in members, going from “10 to 12” a few years ago to “nearly 40,” and this growth can be attributed to the determination of students to set higher goals than the year before.  “We had very gifted students,” said Mrs. Luna.  “These students had a passion to do something new, something different.  So, they decided to apply for the Youth Making Change grant.”  After hearing the news that they had received the grant, worth 2,500 dollars, the students decided to put on a cultural carnival, spreading their appreciation of the Spanish culture.  Mrs. Luna explained the events of the carnival, saying, “On April 29th of last year, we had a cultural carnival here where we had different carnival games outside, and we had different workshops here in the building.  They were all related to culture, heritage, history… of the Hispanic community.  We had more than 100 students and parents attend.”  It was a great opportunity for parents to see the work their young leaders had done, and how their investment to the Spanish language had given them the unique opportunity to create something special.  As a result, the club has grown, and now boasts more than 50 students.  These students are following in the footsteps of last year’s leaders, again applying for the Youth Making Change grant, hoping to put on another event for the culture they hold so dearly.  For Mrs. Luna, she has seen the change firsthand, and the growth the club has experienced is something she is very excited about.   She mentioned how the students have impacted her, saying, “The students motivate me, they give me energy because I see their passion… I see the joy in them, I see how happy they are, and how they feel about what they are accomplishing.  It’s what keeps me going, and what keeps them going.”

The Spanish Honor Society is hard at work, creating a new atmosphere fueled by the appreciation of the Spanish culture.  In only a few months, they have made an incredible amount of progress in furthering their cause.  The students in the club have admirable goals, and their unwavering determination to succeed is what has allowed them to make change.  The future certainly looks bright for the club that brings language and community service together, providing its community with greater cohesion and a growing appreciation for Spanish culture.