A Project for Better Journalism chapter
The Breeze
SENIORS! Your senior portraits are due soon. Check out our Flow Page for more information on all things Yearbook!  More →
Opinion

Trump vs. Hillary: The Presidential Debate 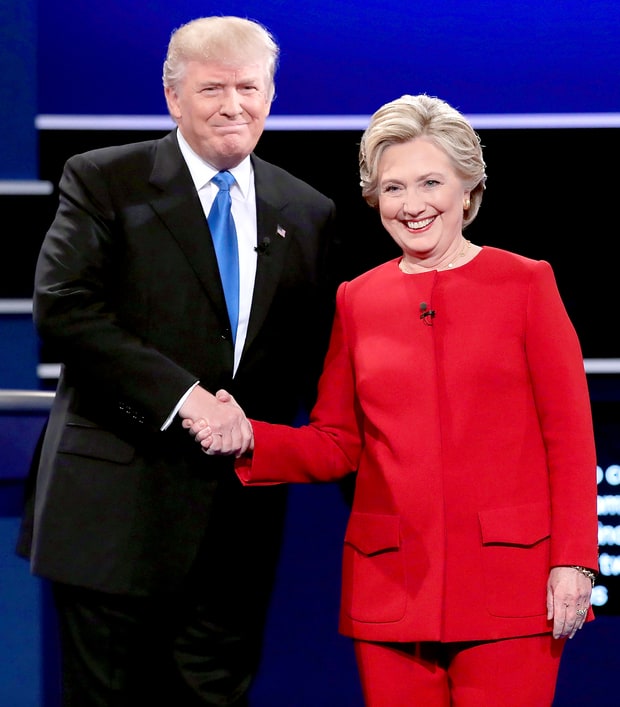 These are a few highlights:

The beginning of the debate had been normal, greeting each other and starting off with questions such as “How are you better than your opponent on jobs?” or “How will you put money into the pockets of the American people?” Soon after, the arguments came with both candidates going way over their two minute limit.

With the question mentioned already “How are you better than your opponent on jobs?” Clinton’s response was “We build an economy that works for everyone, made it fairer to raise minimum wage to $15 and equal pay for women.  Have wealthy pay their fair share for the people.” As for Trump: “Our jobs are fleeing out of the country. They’re going to many other countries. On my plan, I will be reducing taxes tremendously, for companies, small and big businesses.”

Trump soon then remarked to Mrs. Clinton that she lacked a “presidential look” and “she doesn’t have the stamina.” Clinton had responded back, “he can talk all about stamina. This is a man who calls women ‘pigs’, ‘slobs,’ ‘dogs.'”

One subject had come of the conspiracy theory of Obama’s birth certificate to prove if he was a U.S. citizen or not. Trump argued and argued throughout these last months on why doesn’t president Obama not release his birth certificate and believed he wasn’t an American. Clinton told Trump he was being “very hurtful,” about this subject, his racist lie, not believing our first black president was not an American citizen. Trump said he didn’t quite understand why Hillary was defending president Obama and why she was supporting Obama, when she didn’t like him and made rude comments to him years before and he called it being “disrespectful.”

The biggest truth we know about Trump is he has not released his tax returns and for Clinton we know she used a private email servers for job-related emails and had deleted at least 33,000 of her emails. This was brought up during the debate with Lester Holt asking the question to Trump, “Mr. Trump, you have not released your tax returns; recent nominees released theirs. Don’t Americans have a right to know if there’s any conflict of interest with your tax returns?” Trump’s response was, “I am under a routine audit.”  His biggest line throughout this whole debate was, “when she (Hillary) releases her 33,000 emails that have been deleted, I will release my tax returns.” Clinton apologized, saying she had made a mistake with the private email server and the emails. Of Clinton’s apology, Trump said, “it was not a mistake; it was done purposely.”

One big issue happening in the U.S. is racism. This was also brought up during the debates in the form of this question: “How will you heal the racial divide in America?” Clinton answered that race was a “significant challenge” in the country and this was her response to this subject: “Race determines too much… where people live, education, and in the criminal justice system… we have to earn trust… police will get the best training and use force when necessary.” Trump claimed to bring back “law and order” to fix the situation, but Clinton believes that would not work.

Another concerning issue for the U.S. is terrorism. Clinton mentioned how Trump supported the invasion of Iraq, but he told her she was wrong. Then they talked about the Muslim nation, which Clinton said, “we have to work more closely with our allies. We’re working with our friends from the Middle East, many of which you know are Muslim-majority nations. Donald has consistently insulted Muslims abroad, Muslims at home, when we should be cooperating with them. They could provide us information.” Trump replied back that we have been working with them, but, “look at the middle East; it’s a total mess.”

The biggest thing every American heard in this whole debate was when Trump complained about his “campaign travels” arguing to Clinton, “you’ve seen me; I’ve been all over the place. You’ve decided to stay home (to prepare for the debate), and that’s okay.” But Clinton’s biggest response to this, that may have won this debate for her was, “I think that Donald had criticized me for (prioritizing) this debate, and yes I did. And you know what else I prepared for? I prepared to be president and I think that’s a good thing.”

This debate showed how strong and well prepared Hillary Clinton was, but for Trump, he is showing how much he wants to be right by using arguments. The second presidential debate will be on October 9, 2016, so tune in and watch.